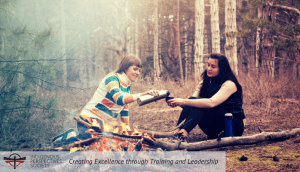 My parents immigrated to British Columbia from Northern California two years before I was born. They came for the beautiful nature, the opportunities to build a life, and the vision of Canada as a free and just country that is presented internationally. I was fortunate to grow up in the interior plateau area of the province in Kamloops. Kamloops is a city where communities are divided by the rivers, with the local Indigenous people, the Secwepemc, having been moved to the opposite side of the river from where the city grew on their traditional lands.

Growing up there, I remember not understanding why the community was divided, and why Indigenous people were insulted, bullied, and marginalized. I remembered hearing hurtful comments and hateful stereotypes shared by the adults around me, and feeling upset and confused because many of the students I went to school with were Indigenous and I knew those comments were wrong and did not apply to who they were as people. In high-school, a friend of mine and I would do our best to defend one boy who was regularly bullied by members of the senior football team. As an adult, another friend shared that as a teenager he took up skateboarding in part so that he would have a weapon to defend himself from groups of guys that thought it was fun to gang up on a younger kid.

Thanks to the enormous work of several leaders from communities across Canada, collectively we are coming to terms with the impact that international colonization of Indigenous territories in Canada has had on generations of families in hundreds of communities throughout the nation. As the deliberate unjust treatment of Canada’s Indigenous Peoples resulting from the desire to take control of territories and resources continues to be revealed, thanks to many courageous people willing to stand up for their rights, each one of us called upon to do our work as an ally. The dedication of the Truth and Reconciliation Commission and their 94 Calls to Action, along with individuals and organizations who are stepping up to accept their responsibilities in repairing the wrong actions of history, have helped bring to light the darkness that is foundation of this nation.

We are part of a transformative time in which we all have an imperative to take action. It has been eight years since the United Nations Declaration on the Rights of Indigenous Peoples was adopted by the General Assembly, and Canada joined in support of the declaration on May 10, 2016 of last year. Becoming an ally to Indigenous people often has uncomfortable moments where we are confronted by the racism of the world around us, and our own outdated beliefs from our upbringing. In a world of entrenched belief systems evolved from our histories, there is often not a lot of support from communities from all backgrounds. It takes initiative and courage, and these actions are essential for leading with integrity as we step into the future.

While a few Indigenous people have taken on the task of educating all of us about our collective history, while at the same time healing their own deep wounds, this work is not their responsibility alone. Allies need to take on the task of social transformation, and share the responsibility of ensuring we move into a future built on integrity, good relationships, and trust.

Dr. Lynne Gehl has clearly identified the roles and responsibilities of an ally in her Ally Bill of Responsibilities, and reflecting and reading through this list is a great place to start. Think about what on her list challenges your beliefs, question why, and look at places where you can easily engage and take action. Find your knowledge gaps and explore ways to learn by visiting cultural centers, going on tours, celebrating National Aboriginal Day on June 21, and participating in training and workshops.

We all have an imperative to do our part, both collectively and individually to help support Indigenous self-determination to repair and rebuild the damage done to communities and peoples. As allies, we must examine how our systems of governance and economics have been built, how our social beliefs are constructed, and explore what each one of us can do to help transform our relationships, workplaces, and communities to truly become the safe and just country we proclaim ourselves to be.

Update: On September 17, 2017 British Columbia Premier John Horgan made a statement saying, ““Our government has made reconciliation a cross-government priority… we will embrace and implement UNDRIP in full partnership with Indigenous peoples.”

United Nations Declaration on the Rights of Indigenous Peoples, https://www.un.org/development/desa/indigenouspeoples/declaration-on-the-rights-of-indigenous-peoples.html

Statement from Premier John Horgan on the 10th anniversary of the UN Declaration on the Rights of Indigenous Peoples https://news.gov.bc.ca/releases/2017PREM0083-001562

Alesha Hayes is the Business Development Coordinator for the Indigenous Perspectives Society – Creating Excellence through Training and Leadership. A non-indigenous ally, Alesha was born and raised in Secwepemc territory and now enjoys life in beautiful Lkwungen territory on southern Vancouver Island. For more information on Cultural Perspectives Training email her at aleshah@ipsociety.ca and visit www.ipsociety.ca