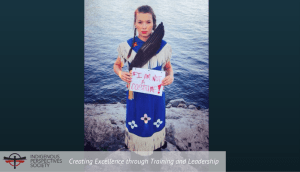 I have worn an indigenous costume. It wasn’t for Halloween, it was for a summer festival and I wore it to be playful about my believed American Indian ancestry, although it really didn’t even come close to a beautiful real buckskin dress. When I put on that costume, I was completely unprepared for the comments it, and I received. And no, they were not about cultural appropriation, they were remarks containing Disneyified hyper-sexualized stereotypes of indigenous women. My costume selection unintentionally perpetuated harmful beliefs.

Growing up, my family thought that my great-grandfather, my father’s mother’s father, was an American Indian from the Phoenix, Arizona area. In the United States of America, indigenous groups were often moved great distances from their traditional territories and told to live on reservations with other unrelated groups. Phoenix is a very culturally diverse area. Both my grandmother and my aunt spent time in Phoenix looking for traces of our family’s roots and with 20 different reservations I imagine this was a challenging task.

In their journey, my aunt and grandmother found out that most of the family records from the time of my great-grandfather had been burned, as fire was a common danger in those old buildings. They were not successful in discovering anything about my great-grandfather’s roots. This happened to families in Canada too.

Keeping in mind the continued oppressive nature of colonization, a people’s traditional dress is not a costume for a party or for Halloween, but rather it is symbolic of a cultural lineage that is still alive and evolving. Cultures are not caricatures or cartoons.

So this Halloween ask yourself these questions to make sure you costume is culturally appropriate:

Think about why you are making these choices and remember that sometimes what makes a costume sexy is that marginalized people are often hyper-sexualized, and that sometimes what makes a costume funny is the fact it is a white individual wearing another ethnicity or race. This is racist behaviour.  As former Indigenous Perspectives Society staff member Alicia BigCanoe says in her I Am Not A Costume campaign, “Let’s get creative, not oppressive.”

For more information on how to have a culturally safe Halloween and the I Am Not A Costume campaign visit www.lspirg.org/costumes.

Alesha Doran is the Business Development Coordinator for the Indigenous Perspectives Society – Creating Excellence through Training and Leadership. A non-indigenous ally, Alesha was born and raised in Secwepemc territory and now enjoys life in beautiful Lkwungen territory on southern Vancouver Island. For more information on Cultural Perspectives Training email her at aleshad@ipsociety.ca and visit www.ipsociety.ca